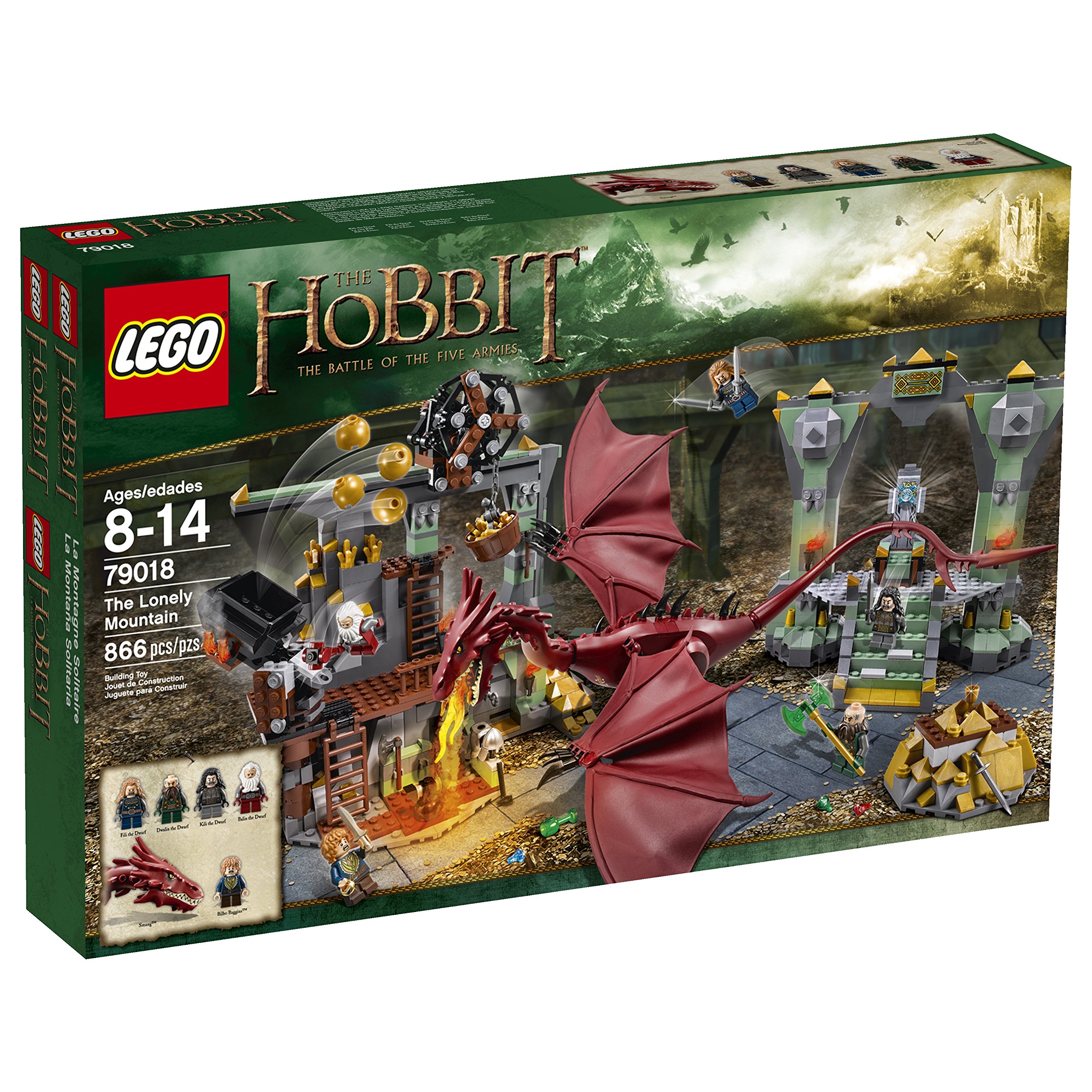 Outwit Smaug, the fire-breathing dragon with Bilbo Baggins in The Lonely Mountain with Arkenstone-encrusted throne and sliding pulley. Enter the lair of Smaug and evade the fire-breathing dragon! Bilbo Baggins has been sent to look for the Arkenstone inside The Lonely Mountain. Find the secret door into the lair of Smaug and enter with the Dwarves. Smaug is an enormous fire-breathing dragon, unlike anything you’ve ever seen before, so move fast! Dig deep for gold with the tools in the mining area, and use the slide to move the nuggets. Hoist the bucket with the sliding chain pulley to transport the gold to the forge. Seek out the throne in which the most prized gem of all – the Arkenstone – is placed… but watch out for the staircase trap! Bilbo Baggins and the Dwarves decide to drive the fearsome dragon out of the Mountain, and devise a plan to do so. Activate the rotating forge’s giant catapult to fire melted gold at Smaug while you try to defeat the fearsome dragon! Includes 5 minifigures with assorted weapons and accessories: Bilbo Baggins, Balin the Dwarf, Dwalin the Dwarf, Fili the Dwarf and Kili the Dwarf, plus a Smaug figure. The Lonely Mountain features the secret door, throne encrusted with the Arkenstone, staircase trap with hidden treasures, secret places for treasures, 7 golden nuggets, 4 melted golden nuggets, 3 diamonds, the key to Erebor, The One Ring, sliding chain pulley with bucket, forging area with a giant rotating catapult, anvil, barrel, furnace, 2 ladders and torches with translucent flames. Also includes mining area with 2 layers for hidden treasure. Smaug the dragon features translucent fire breath, scales, giant posable wings, sharp claws, spiky tail and posable joints. Locate the secret entrance with Bilbo Baggins and the Dwarves. Seek out the precious Arkenstone embedded in the throne.
Show More
Reviews

Disclaimer: The price shown above includes all applicable taxes and fees. The information provided above is for reference purposes only. Products may go out of stock and delivery estimates may change at any time. Desertcart does not validate any claims made in the product descriptions above. For additional information, please contact the manufacturer or desertcart customer service. While desertcart makes reasonable efforts to only show products available in your country, some items may be cancelled if they are prohibited for import in Singapore. For more details, please visit our Support Page.