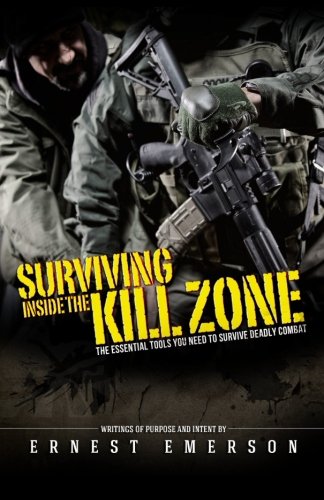 This is not a book of techniques. This is a book about what you need to know in order to make any technique work when a real bad guy is trying to kill you. Ernest Emerson is an instructor, author and lecturer. He is a Black Belt Hall of Fame member, owner of the Black Shamrock Combat Academy and one of the most sought after tactical instructors in the world. One of his most popular lectures, is titled “Surviving Inside the Kill Zone.” He has often been asked the question, “When are you going to put this in a book?” That question is now answered. In the brutal arena of life and death combat, there are things that you can do and things you can’t. There are also things you should always do and there are things you should never do. And the right things that you are able to do in combat are the ones that will enable you to survive a deadly attack. Emerson always starts this lecture with the question; “How many first responders are in this room?” There are always several police, firemen, or paramedics in the audience who raise their hands. And then the lecture starts. In this book you will learn the principles, concepts, strategies, and tactics behind the training methods Ernest Emerson has been teaching to members of Special Operations Units, Government Agencies, and Counter-terrorist Units for over two decades. The book breaks down the subject into seven related but distinct chapters that starts with Education, stressing the importance of learning strategies, tactics, weapons, and methodologies of the bad guys. Emerson then follows with a further exploration and recommendation for choosing the right weapons, how to judge a training system, and how to identify what you really need to know and how to learn it. Emerson explains why half of what you know, won’t work in combat and only about half of what really works in combat is what you’ll actually be able to do. That only leaves about 25% combat effectiveness, when you’re up against someone is who trying to take your life. This book gives you the tools that make that 25% and make it more effective and powerful than the other 75% left behind. The book introduces you to the rules of combat, the important role of goals and the right strategic objectives and how to apply them to both training and combat. Emerson provides valuable insight into the predator/prey relationship and how you can use it to work against a predator and effectively take you off their radar as a potential prey. Learn how to identify and break the sequence of events that leads to a surprise attack. Mr. Emerson also teaches the CIA maxim of Detect, Deny, Destroy, and explains how a system that works so well for their officers can be used to work just as well for you. Knowing that the physical battle is only part of any aggressive or violent confrontation, Emerson devotes an entire chapter to the Warrior Mindset and also the importance of the Will in developing the absolute conviction that you will never quit and never, ever give up, using the same techniques as taught to U.S. Navy SEALs. There is also very valuable information on developing the Mental Trigger, material that until now has never been covered in any other civilian source. And you will learn how functional conditioning and strength play a vital role in your ability to fight and prevail against the attacker. Combat strength conditioning is explained in terms that allow you to reevaluate your training regimen and fine tune it for optimum combat performance. It was mentioned that at the beginning of his lecture, “Surviving Inside the Kill Zone” he asks how many first responders are in the room? Emerson asks the same question at the end of the lecture. This time every hand in the room goes up. Read this book and get ready to raise your hand.
Show More
Reviews

Surviving Inside the Kill Zone: The Essential Tools You Need to Survive Deadly Combat

Disclaimer: The price shown above includes all applicable taxes and fees. The information provided above is for reference purposes only. Products may go out of stock and delivery estimates may change at any time. Desertcart does not validate any claims made in the product descriptions above. For additional information, please contact the manufacturer or desertcart customer service. While desertcart makes reasonable efforts to only show products available in your country, some items may be cancelled if they are prohibited for import in Singapore. For more details, please visit our Support Page.